All Glories To Sri Guru And Gauranga 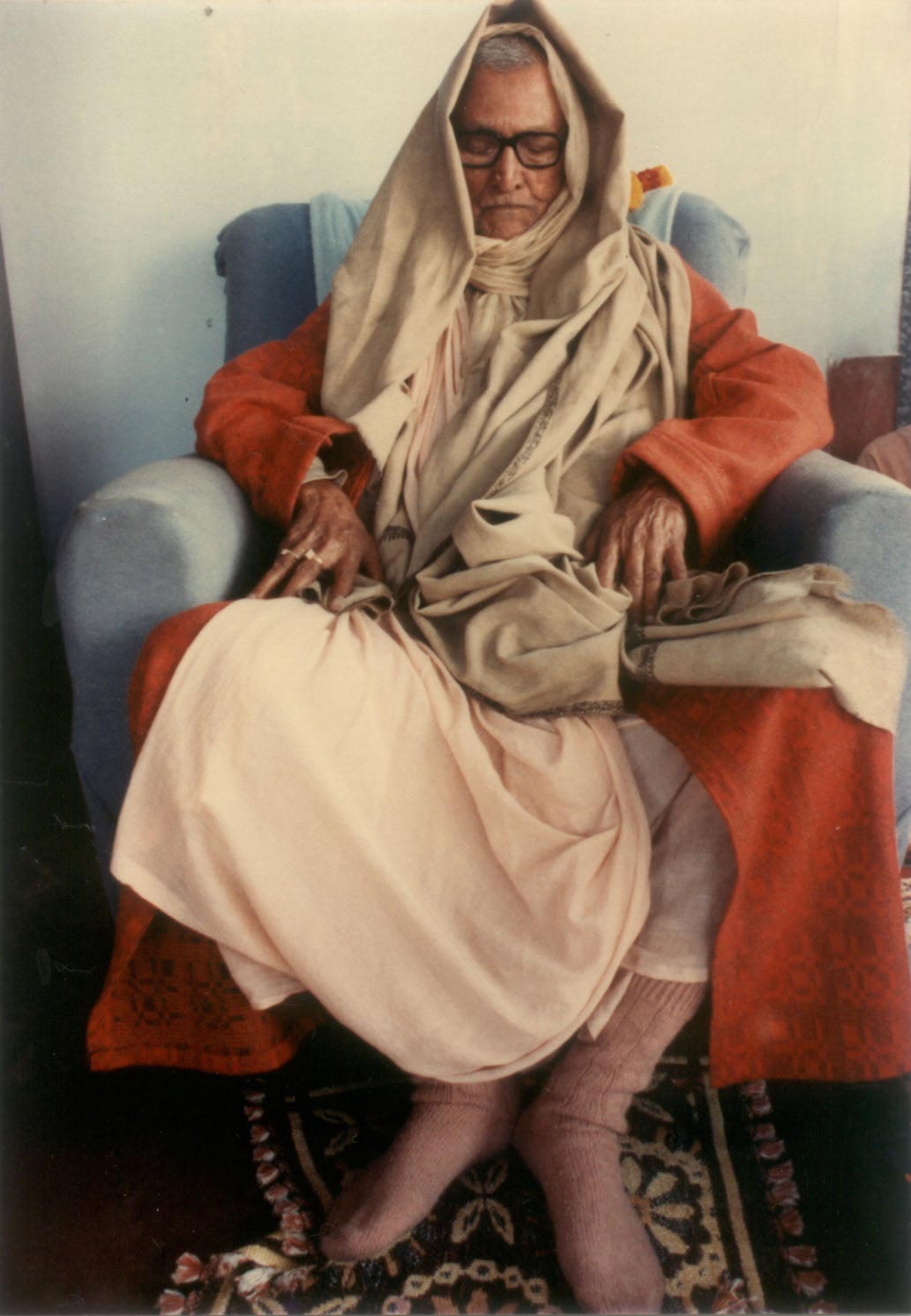 Dear devotees and friends, I offer my humble dandavat pranams to you all in remembrance of my Divine Master. In August of 1981 His Divine Grace Srila Sridhar Maharaja spoke the following:

“…to take tapes from me and to preach, to supply it to the preachers, of course the idea is good.”

“I did not go to the West but in my last days Prabhupada [Srila Saraswati Thakura] is wresting something what he deposited with me, to take it for the West. I can’t deny, as much as I can do, I shall do.”

Now more than 27 years have passed since Srila Sirdhar Maharaja expressed his desire that the preachers have access to his recorded discourses.

Previously we have offered from our website those recordings that were already available in some form to the public. But there are many more recordings that, until now, were not available even to the disciples and grand disciples of His Divine Grace.

With each passing year, the devotees’ desire to gain access to the full spiritual wealth of Srila Sridhar Maharaja’s discourses increases. The current generation of preachers, disciples of Srila Govinda Maharaja, seem especially eager not only to hear the words of their parama Guru but to acquire a deep appreciation for their meaning which they in turn enthusiastically impart to others.

It is our desire to promote such eagerness and enthusiasm by offering access to a large collection of Srila Sridhar Maharaja’s recordings. Of course in so doing all those of a similar mind will delight in hearing these recordings regardless of their generational placement.

In the interest of propriety, some portions of the original recordings have been omitted from this public offering. I had not intended to do any editing but one of my Godbrothers strongly advised me to do so. I therefore went through each of the recordings applying my own judgment as to what should be omitted. Practically the only parts removed were those Srila Sridhar Maharaja himself indicated should not be made public.

As to what should be made available, I relied primarily on what I could understand of Srila Sridhar Maharaja’s own desire to make his opinions known. He exhorted us to follow a progressive path to truth, “Thesis, antithesis and synthesis.  In this method the whole thing is progressing.” He encouraged us to push our beliefs into the marketplace of ideas to either be accepted or challenged in the light of day. And, he provided the example for us to follow:

Srila Sridhara Maharaja- Within these last days I insulted them [the GBC] permanently and the talk has been recorded? Uh? You caught me?”

Dhira Krishna Swami- “I won’t distribute this recording. I will not distribute…”

Dhira Krishna Swami- “Then I will.”

Srila Sridhara Maharaja- “What I am within me, the people will know, and they will abuse me. But what I am, if I need to be abused, it will be well and good. Any offenses will be purged out.

Srila Govinda Maharaja also expressed his opinion that Srila Sridhar Maharaja wanted to reveal the inner wealth he collected from Srila Saraswati Thakur for the benefit of all, even though some objected to his doing so:

“Then, Guru Maharaja clarified many slokas. yena mam upayanti te, [Guru] Maharaja told there, upa[pati], this word, showing paramour love, it is very much a thinking conception, deeply thinking conception. What was given by Guru Maharaja, everybody will not understand that. But, by the mercy of Guru Maharaja, if they will try to understand, they can understand something. And Guru Maharaja told Sripad Sagar Maharaja, “You can add it [meaning of upayanti] in the English edition of Srimad Bhagavad Gita.” I did not give it in the Bengali edition. I was a little afraid to give it. And, at that time, Sripad Jajavar Maharaja influenced me too much, “You give what is there, [the direct meaning] that way. But, you don’t try to expose inside matter.”

I was also thinking, “I am publishing for the general public. Then, it will be good not to give too much. Who wants to know, he will come to Guru Maharaja, or to me. What I know, what I got from Guru Maharaja, I shall explain it.”

But later, Guru Maharaja was very merciful. That is, He gave gayatry-artha-viniryasam, gita-gudhartha-gauravam [Pranati-dasakam: 5 [1] . What was not given by other acharyas before, that explanation of gayatri mantram, that was also given by Guru Maharaja.

I was always giving some objection. That is, I was afraid. It is a hidden matter. But Guru Maharaja is trying to expose it, and nobody will understand. They will take it some other way and use it for their own mundane benefit.

Then, one day, I told Guru Maharaja, “You are giving gayatri explanation in front of the Western devotees. They do not know anything, actually, and you are explaining it.” But, Guru Maharaja’s mood was, “I do not know Western or Eastern. I want to explain something and they have come to me for hearing. I am thinking they are sincere seekers and they are trying to know something from me. If I do not explain the gayatri mantram, who will explain it? Nobody can do it, actually. And it will stay in a hidden position. From the time of Veda Vyasa, up to today, nobody has explained it. But many know it. Veda Vyasa knows, Rupa-Sanatan know, Jiva Goswami knows, everybody knows, but nobody has given it. That is, I want to give it. What offense will come, that will come. And, if you want to hide it, you can try to hide it, but I shall give.” That was his mood, in his last days. Guru Maharaja was not very, not very cautious. If anybody asked anything, he is giving answer. That was his way”. –Morning lecture, Miami, Florida, 7/17/93 [1] Pranati-dasakam Verse 5, found in Sermons of the Guardian of Devotion Vol 1

Some may think we have gone too far, revealed too much or proceeded recklessly. I am prepared to defend my editing decisions except where I may have overlooked some particular section. I welcome the reader/listener to contact me in the event you disagree or believe I including something that should not have been. Before doing so, please read my article “Editing the Acharya“ where I explain my rationale in more detail.

We cannot estimate the extent of the contribution of His Holiness Sripada Bhakti Sudhira Goswami Maharaja who has devoted himself for many years to collecting, maintaining and preserving these recordings. Without his unswerving dedication to this project we can hardly imagine how it would otherwise have come about. The recordings themselves were made by several persons present at the Math including Sriman Swarupananda Prabhu and others

Sriman Gokulananda Prabhu provided much of the inspiration to me to make these recordings available through our website. In addition, he has logged countless hours doing behind the scenes work needed to provide all the links and code for downloading and streaming the files which number over 900. I could not have proceeded without his dedicated help.

These recordings are presented here for the serious student of Srila Sridhar Maharaja. They are an archive of original, raw recordings. The audio quality is sometimes very poor and requires serious attention to understand his words. At other times the quality is good and readily understood. I would advise the serious student to start at the beginning and go through each recording in the order they were made much as one is advised to go through the Srimad Bhagavatam. Jumping immediately to controversial portions may tend to promote misunderstanding rather than the desired result.

It is our hope that making these recordings available will encourage further exploration of this mine of pure spiritual ore. The veins run deep and long and we expect many generations will find new veins branching off from the main ones and running in directions previously unknown and unexpected.

To further this exploration we plan in the near future to construct a forum for devotees to share their indexes and transcripts of the tapes. While I have many quarrels with modern science, I find one of their methods very useful, the sharing of information so that each may benefit from the research of the others.

By making research public it invites inspection, correction and improvement. Our hope is to one day see a complete searchable database of Srila Sridhar Maharaja’s words. We see this as one of the initial steps in that process.

“So I am unwilling and you have come and forced. Extract[ed] from me. If you find anything good, what is akin to your master’s gift, if you find that what you have already got from your Spiritual Master, similar things are to be found here, then of course you may come and try to snatch it and distribute to the world. You have got that right.”
-Srila Sridhar Maharaja

Praying to the lotus feet of His Divine Grace Srila Bhakti Sundar Govinda Deva-Goswami Maharaja, that he accept us as meager assistants in his service to Om Vishnupada Srila Bhakti Rakshaka Sridhar Deva-Goswami Maharaja, we present these recordings for the satisfaction of the devotees in the line of Sri Chaitanya Saraswati on the day of the 524th. celebration of the auspicious advent of Sri Gauranga Sundara, Sri Gaura-Purnima, March 11, 2009.

(Click Image to Donate)
Help maintain the Math, Deities & Servants of the Mission! It’s tax deductible. Mail a donation using the address on the Contact Page.

Srila Giri Maharaja discusses how “Books are Still the Basis. Part 1 of 2.